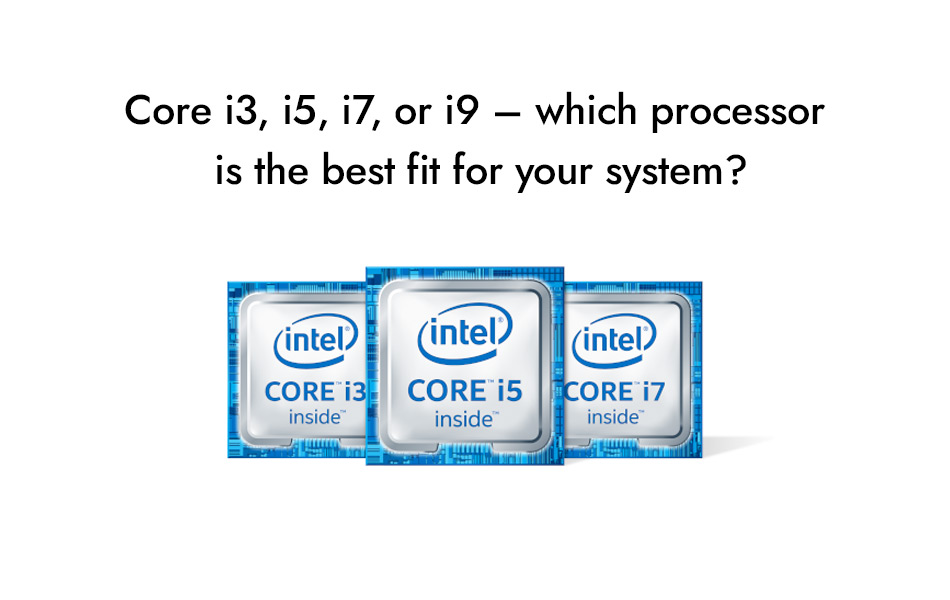 The notion that the higher you go, the more you have is widely held, but the question is whether you truly need more. You definitely do not want to squander your money on something that exceeds your needs.

To decide on the perfect match, one should assess their requirements. Though Core i9 offers the highest power, Core i5 is a safe choice. Whether you have a laptop or desktop, Core i5 delivers a fine performance, especially in its 11th generation. In addition, they offer ample processing power for high-end gaming, photo, and video editing. They also consume less energy than a Core i7 or i9 processor, which is advantageous.

Intel’s Core i3 processors aren’t often discussed these days, but they’re still available and ideal for low-cost PCs and gaming rigs. However, you’d have to buy a 10th Gen i3 chip, as an 11th Gen Core i3 one has not been launched yet.

What does a higher core count mean?

Essentially, a core count indicates two things: the number of applications that can be handled and the speed with which they can be processed.

In certain applications, such as gaming, a small number of fast cores is preferable. Others, such as video editing, need a processor with many cores since the programs are designed to use all of the available CPU power.

Previously, we would have explained another concept, hyperthreading, to get to the bottom of performance discrepancies. However, Hyperthreading is available on all of the primary 11th Gen processors.

In addition, high-end Intel CPUs have greater cache memory than mid-range and low-end Intel processors. This is a high-speed storage device that holds the data that the CPU cores are likely to require. For example, the Intel Core i3-10100 has 6MB of memory, whereas the Intel Core i5-11600K has 12MB of memory.

Top-spec Intel Core i9-11900K and Intel Core i7-11700K CPUs feature 16MB of cache. The last-generation i9-10900K, on the other hand, has 20MB. Because the newest version has fewer cores, Intel can excuse this, but it’s another reason why some techies dismiss the 11th Gen Core i9.

What does the name mean when choosing an Intel CPU?

Choosing a processor may appear to be a straightforward task. It’s one of those situations where “good, better, best” applies. However, before you walk to the checkout, you should pay attention to the letters at the end of a CPU name.

Here’s what they tell you.

K – This means the CPU has been unlocked, required if you want to overclock it. This is when you increase the speed of a processor’s cores over their default settings to improve performance at the cost of greater heat. Gamers prefer unlocked CPUs.

F – A graphics component is not included in processors with an ‘F’ at the end. This implies they’ll require a separate graphics card to run Windows, or they won’t be able to show it at all. However, those creating a gaming PC might consider one of them since it will save them some money that they may use towards anything else.

T – You are unlikely to desire a ‘T’ CPU. These operate at slower clock rates to save energy. So what makes you think you’d want one? They also produce less heat, making them ideal for small PCs with limited space.

G – This indicates that the CPU has its own half-decent graphics division. However, Intel now uses the letter ‘G’ in the stacks of their Core I series laptops, rendering it useless until the number after it is examined. For example, a laptop with the designation “G4” contains an Intel UHD graphics chip, a rather weak graphics chip. The “G7” designation denotes Intel Xe graphics, which are quite good. They allow you to play some very demanding games.

H – ‘H’ denotes high performance. These CPUs get you closer to the power of a desktop PC, but they also require a lot more battery and generate a lot more heat while under load. They’re utilized in laptops that are larger and heavier, so stronger cooling solutions may be installed. However, you probably wouldn’t want to carry most of them with you daily.

U – The ‘U’ is absent from Intel’s 11th Gen laptop CPU nomenclature. However, it’s essential to know since it was previously ubiquitous, and outdated CPUs will float about for a long time. It stands for Ultra Low Voltage, which translates as “battery-saving.” Intel’s “G” laptop CPUs are similar, designed primarily for thin and light notebooks.

What precedes the Core series?

The Intel Core series is followed by the Pentium and Celeron series.

There are two types of Intel Pentium CPUs: Gold and Silver. Pentium Golds are desktop CPUs that are a good choice for a computer that will only be used for Office applications, video streaming, and web surfing or as part of a low-cost gaming PC with a mid-range or low-end graphics card.

However, they only have two cores and perform poorly compared to the Core i5-11600 and the Core i5-11400. The newest Pentium Gold processor is the G6605. Pentium Silver chipsets, such as the N6000, are laptop CPUs that are just good for the fundamentals. Make the upgrade to an 11th Gen Intel Core i3 if it isn’t too expensive.

Celerons are Intel’s least powerful CPUs, and they aren’t recommended in general. These CPUs are generally significantly sluggish in laptops. In a desktop setup, you should spend a bit extra on at least a Pentium Gold processor.

Is it worth waiting for Intel’s 12th generation processors?

The next generation of Intel CPUs will be more revolutionary than the previous one. Alder Lake is the name given to the 12th generation of desktop CPUs, including a mix of ‘power’ and ‘efficiency’ cores. This setup is comparable to the Apple M1 CPU found in the most recent MacBook Air. It’s a significant shift.

Whereas today’s Core i9 CPU has eight cores, the next one will most likely have sixteen: eight “large” cores and eight “small” cores. The ambition is for a high-end CPU that will outperform AMD’s Ryzen 9 5900x/5950X and reclaim some of the ground Intel has lost in the laptop market to Apple.

The next generation of Intel processors will be considerably more intriguing than the last one. However, because they use a different socket, you’ll also need a new motherboard.