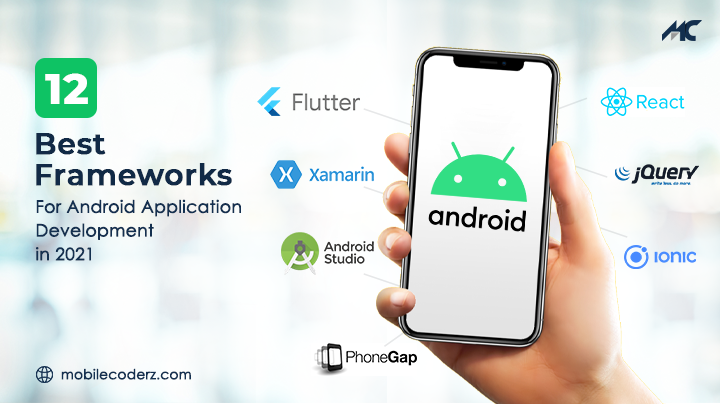 Over the last five years, Android has gained high traction in the mobile OS market. It holds 72% of the market share across the world. So there is no doubt why Android application development is in trend.

What are the types of Android frameworks?

Right now, diverse varieties of Android frameworks are available. All of them are for designing cutting-edge apps. So, we have brought the list of the top 12 best Android app development frameworks to help you out. These are:

It’s a framework having the best SDK for developing enticing and fully-featured mobile apps. The framework is entirely compatible with designing apps for all available devices using one codebase. With the launch of Flutter, Android app development companies find it easy to implement changes in the app code quickly. This Android application development platform is highly superior and has a set of customized widgets. Dart has been declared as the coding language of Flutter. Its best part is its ability to deliver native app-like interfaces.

Recently, a study showed that 25-30% of the developers use this Android app framework. So the particular framework has a strong community.

Table of Contents hide
1 Why is Flutter the best framework for mobile app development?
2 12 Best Frameworks For Android Application Development in 2021
3 Join the Club!

Why is Flutter the best framework for mobile app development?

React Native is the trending Android application development platform launched by Facebook. The platform supports distinctive operating systems(Android& iOS). Developers use it to create high-performing apps in a short period. This is a modest and economical source for the app development process.

Being an authentic framework, React Native allows you to build native mobile applications without compromising user experience. It is integrated with a large set of native elements such as text, views, images to develop a cutting-edge UI. The framework uses JavaScript, which is used for full-stack.

It has the biggest number of developers and has a better online community. React Native developers always focus on improving and debugging the issues.

It’s a fabulous framework for app-building and is based on HTML. TheAppsBuilder platform favors codeless UI. To use it for Android applications development, coding is not required. This development framework is suitable for designing information-based Android applications. Its press and hold-down function allow you to design the application instantly. Unsurprisingly, TheAppBuilder has inbuilt blocks that consist of different functionalities. These include push notifications, feedback, and content updates.

Undoubtedly, the pros of this Android framework are that it can easily integrate with the Play store of Google. This exhibits its presence on social networking sites.

It was launched by Microsoft and is an open-source framework. Xamarin is useful for developing smart mobile applications using “.NET.” This is quite older in comparison to other cross-platform frameworks.

Xamarin uses technologically upgraded tools. The development team uses these tools with the help of a code written in C# or XAML. Due to code sharing features of this framework, developers spend less time on coding. Also, it is easy to overcome bugs.

After getting associated with Visual Studio IDE, Xamarin has been favored by Siemens and Pinterest for developing mobile apps.

PhoneGap is a versatile Android app framework applicable to developing apps for all platforms. This supports HTML5 and CSS3, allowing it to access fundamental hardware. The fundamental hardware includes GPS, camera, and accelerometer. In addition, it uses Javascript to manage the backend logic for mobile apps. The integration of Javascript in PhoneGap provides it a competitive advantage. Moreover, it is a widely-used programming language.

Ionic comes under the group of the top cross-platform app-building framework. Its UI toolkit is suitable for all platforms( iOS, Android, & web app).

The benefit of using the particular platforms is its templates. You get the option to use over hundred inbuilt UI components. Action sheets, forms, tab bars, filters, list views, and the navigation menu. This motivates developers to design better applications without wasting time on UI components. If designers know Javascript, CSS, or HTML, it makes Ionic more affordable.

Corona has always been favored as the great Android application development platform. This is an ideal choice for developing mobile apps and games for almost every device. These devices could be desktops, mobile, or tablets.

Corona is supported through a Lua-based framework. This scripting language provides both speed and flexibility to develop mobile apps.

The software development kit of Corona has been used enormously by game developers. It is perfect for designing cross-platform apps. Corona SDK reflects changes quickly in the simulator, whether a business or a game app.

Framework7 is the open-source HTML app development framework to design apps. This designs PWA, desktop, web & mobile apps with a native experience. It covers Android and iOS platforms for app building. Framework 7 is a suitable choice because of its platform-independent nature. It has the best collection of app development components with impressive animations. The framework doesn’t have dependencies like Angular and React. Developers can easily use it if they are familiar with JavaScript.

Similar to other frameworks, it has also been considered the preferred choice for designing cross-platform apps. This uses the single code for distinctive platforms to run mobile applications. Free, open-source Titanium has powered it. Being a JavaScript-based SDK, this contains 5000 APIs. These APIs are suitable for all possible operating software. In addition, its HTML5 format permits you to repeat 90% of the code.

Native Script is a great choice among open-source frameworks. It is the best source for developing native mobile applications. The particular framework is favored by JavaScript, Angular, CSS, Vue.js, and Typescript. It has shown its prominence among Android app frameworks. This ensures fast app downloading and is used by the leading companies. Organizations are using it to show a strong business presence.

Mobile Angular is the open-source known UI framework. This uses the Twitter Bootstrap & Angularjs framework to simplify Android application development. It is integrated with multiple UI components such as overlays, switches, navbars, and scrollable areas to create a compelling user interface for mobile applications. Mobile Angular UI is the preferred one to develop cross-platform apps. It has feature-riched libraries like fastclick.js and overthrow.js for delivering result-oriented app solutions.

Monaca is an excellent selection for mobile app development. It has the amalgamation of different products to maneuver the app-building cycle. In addition, it contains a list of software tools that empowers a cloud-based IDE. This is useful for creating and installing HTML5 cross-platform mobile apps. A framework like Monaca has been developed using the open-source Apache Cordova.

Every mobile app project has its own business goals. Therefore, labeling any framework as the finest one for Android application development is not easy. So, the ideal way is to compare every framework and select the one that suits your organization’s objectives.

Erma Winter is a mobile app developer at MobileCoderz, the leading Android app development company. With decades of experience, She has helped many businesses to harness the capabilities of profitability. In her free time, she loves to play volleyball and cricket.